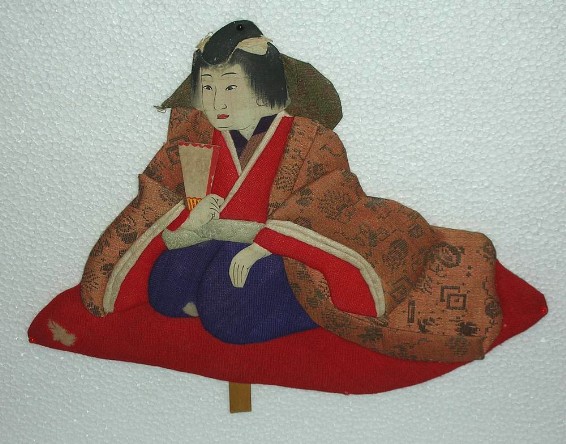 The doll making has been elevated to art form in Japan, and Oshie dolls were extremely popular items among wealthy classes along the whole 19th century. They dolls were obtained recycling old, dismissed kimono silks, that were cut and fitted to padded cardboard outlines usually representing either a Geisha or a Samurai.

Hands and faces were then hand painted, and the whole very much in the style of the Ukiyo-e genre.
The results - dolls that are neither 2D nor 3D, rather something in between - were often brilliant, and used to decorate the rooms of little girls.
The present lot fits this canonical procedure, with non-padded details delicately drawn with dark brown ink (see Geisha face and hand.
The whole had been then mounted on heavier cardboard and a stick, as customary. Condition is great with just a tiny bit of wear on silks due to age. A rare, interesting and funky thing. 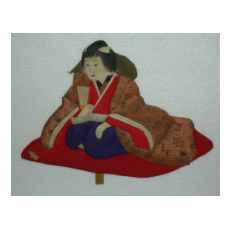 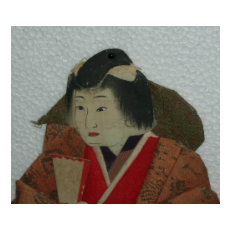 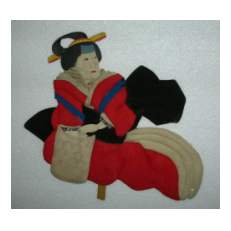 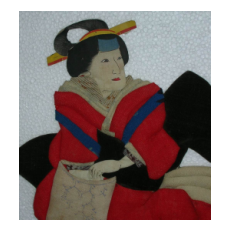 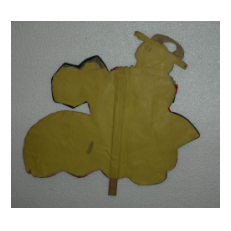 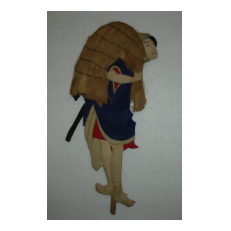 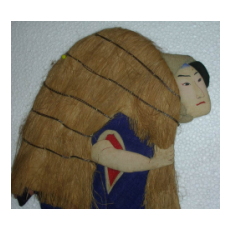 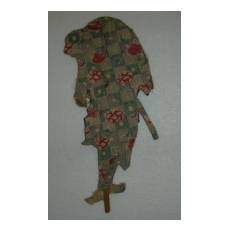 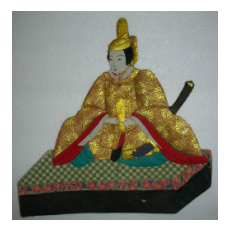 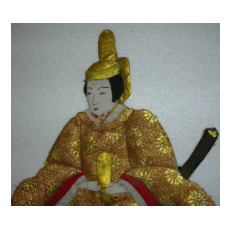 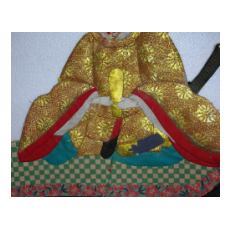 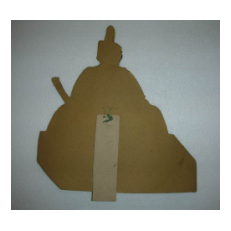 A sombre life style and frugal habits were a standard for Japanese people, at least until WWII. This relates with poverty at the countryside of course, was linked to a certain ethics of upper classes anyway.
To this, it must be noted that in Edo Japan the government was based upon a division of classes that, in descending order, were: samurai, farmer, artisan and lastly merchant. The reasoning was that the Shogun needed protection, so most important were his soldiers, the samurai.

The samurai’s salary was paid in rice so the farmers were next in importance. Clothing, shelter and tools were necessary, so artisan and craftsmen were following. The merchants handled money and goods they did not produce themselves, and were not as hard working as the farmers, so they were accorded the least respect (ha ha).
Therefore, it should be no surprise to hear that the samurai’s wives and children were recycling dismissed silks and handcrafting items as a mean of secondary income. Particularly appreciated were the ‘oshie’, three dimensional “pictures” made of cardboard patterns wrapped in silk and stuffed with cotton.
What we have here is an example of such a ‘textile painting’ representing in a simply astonishing – and much Japanese – way a red carp (koi)  . I fear photos cannot do justice to the quality of work needed to obtain the result (look at the teeth!). In this case, I do not think the textile used was recycled, rather a purpose made lightweight silk crepe, dyed in a ‘shibori’ technique to obtain texture of fish scales.
Properly stuffed and embroidered with a golden thread, this tiny object has then been stuck to a narrow cardboard to produce the final result. There are gentle signs of wear to the textile and cardboard shows bit of age-foxing, but nothing much disturbing. Bold and subtle at same time… something for those not afraid of the out-of-ordinary.
Back to content